Unbridled, the Movie, to Screen September 17 in the EQUUS Film Festival at the World Equestrian Games

elaine lockhead-castelao11:25 amOctober 28th, 2019
Unbridled, the Movie, to Screen September 17 in the EQUUS Film Festival at the World Equestrian Games

Unbridled, the movie, is set to screen in the EQUUS Film Festival (EFF) within this year’s FEI World Equestrian Games™ (WEG) at The World Equine Expo™ (WEE), September 17 at Tryon International Equestrian Center (TIEC) in Western North Carolina. 500,000 people are expected to attend this event that is conducted once every four years. 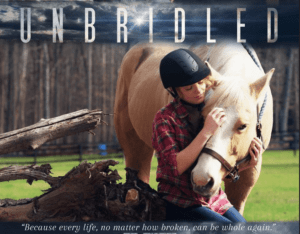 Unbridled producer, Christy McGlothlin, in attendance on a post-screening panel, will discuss the film’s relevance to the equestrian community as well as society at large. McGlothlin will explore the challenge of horse training in filmmaking plus the relevance of the film’s story – the pairing of abused women and children with a compatible but also abused horse, in a caring therapeutic setting, the subject of the full-length movie, Unbridled.

Continuing after her panel appearance at 10:45 am ET on Sept. 17 at the EQUS Film Festival theater, located near Legends Plaza and part of the World Equine Expo, Christy McGlothlin will be joined by the film’s principle starring horse, Dreamer and trainer, Lindsey Partridge, at the theater entrance. Founder of Harmony Horsemanship™ and president of Natural Horsemanship Association, Partridge is a Horse Wrangler for feature films and champion at the 2015 and 2016 International Thoroughbred Makeovers. A leading advocate of liberty work and bridleless riding, Partridge will demo the skills and training expertise for which she and her horse Dreamer were cast and chosen to assist on the Unbridled set. The duo won the hearts of the film’s writers, whose film storyline depicts the time-honored healing bonds between people and horses.

Unbridled is an uplifting story of overcoming some of life’s greatest obstacles. The film tells the story of an abused girl, played by actor Tea McKay, in her debut role, who teams up with an abused horse, played by Dreamer, and their journey to healing, inspired by a true story.

The film draws attention to sex trafficking and domestic abuse as well as the use of equine assisted psychotherapy (EAP), as practiced by the Corral Riding Academy in Cary, NC, which since 2008 has helped over 100 abused girls through one-year long therapy programs. The pair abused girls with abused horses in an intensive one-on-one training in which girls teach the horses to trust and, in turn, the girls learn trust. The story depicts a healing process of abused girls and the horses they care for. A portion of the proceeds from Unbridled sales goes directly to Corral.

“In the movie UNBRIDLED, you will see healing for both at-risk teenagers and rescued horses,” said Elaine Lockhead Castelao, ThinLine’s founder who supported the movie project and helped bring the fundraising idea to life. “Every rider, every horseman and horsewoman, experiences that special bond between horse and human at some level. This is why we are all one and why this film speaks to so many.”

Trainer Lindsey Partridge has been riding since she was 8 years old, started coaching natural horsemanship at the age of 16, and published her first book ‘Natural Horsemanship: Answering the What, Why, and How for All Disciplines’ when she was just 23 years old.

Jerry McGlothlin is President of Special Guests, Inc. and executive producer of multiple movies including his latest, Unbridled.

Jerry has worked with numerous celebrities including Barbara Walters and one of his personal favorite clients, the late great Ed McMahon, who Jerry personally placed on many dozen talk shows as a guest.

Jerry has nine children and is working on having more.

0
0
How Can A Seat Saver Improve My Riding?
ThinLine and ‘UNBRIDLED’ Help Raise More Than $60,000 for Equine Non-Profits