The only saddle pad endorsed by back surgeons, master saddlers and veterinarians. 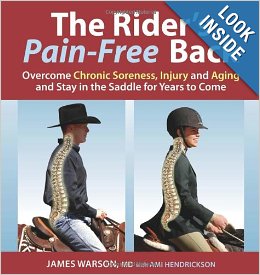 Back pain in horseback riders is nothing new, “it’s been a problem for at least 3,000 years,” say James Warson, M.D.

The horseman and now-retired physician spent 20 years as a neurosurgeon and medical director at a Fort Collins, Co. clinic. He combined his medical skills with knowledge of horsemanship, tack, and different breeds’ gaits to help riders alleviate back pain and return to riding.

Through the years, his client list has included riders of all disciplines; hunter-jumpers, western pleasure competitors and bronc riders. Not all his patients were older, either. In fact, one patient was a 19-year-old world-champion equitation rider with a degenerative arthritic condition.

Before consulting Warson, many patients were told by other physicians to quit riding completely. “With some of those people, you might as well have told their hearts to stop beating,” Warson empathizes.” “Well-meaning, yet uninformed doctors often give such advice.”

Warson recognizes the therapeutic benefits of horseback riding. He says that just because you have back problems or recently had back surgery doesn’t mean you must stop riding. A few simple modifications to your tack, riding techniques and mount, combined with regular exercise and stretching routines, might be all you need to ride comfortably.

Warson shares his philosophies and recommendations for rider suffering from back pain. Also, five horse people explain how they manage their back problems and keep riding a part of their lives. 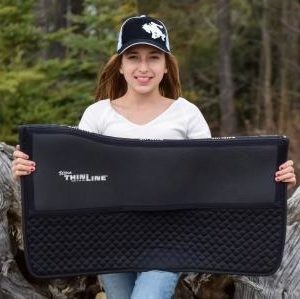 Riding’s Effects on the Back

At least 90 percent of Warson’s patients reported lower-back, or lumbar pain, “Most of them didn’t have neck problems,” he says. “If they did, they were somewhat incidental.”

Most riders have abnormally functioning backs, even though the problems haven’t’ yet escalated to causing chronic pain. Back problems are especially common among western riders, because they usually sit all gaits, and the concussion jars their tailbones up through their backs to cause premature ligament tightening. Premature aging also occurs in the disks, shock absorbers located between vertebrae. Muscle degeneration can also be an issue, as can attempting to guard against pounding.

“Many people (I treated) started riding late in life and were very stiff in the saddle,” Warson explains. “They spent a lot of time standing in the stirrups to guard (against pounding), because they didn’t have a lot of balance or feel of the horse.”

This is often more concussive than sitting, the physician says because the leg-muscle stiffness causes rigidity, which counteracts the motion.

Back weakness is a major cause of pain and degeneration, Warson says. That’s why strength training and flexibility exercises are so important. And, Warson warns, some people are simply genetically predisposed to arthritic conditions.

Many of Warson’s patients were recovering from non-riding-related injuries,  so riding concussion worsened their discomfort. Some even had surgery. But that wasn’t the end of their riding careers by any means.

Warson recommended that his patients start riding old, quiet, well-broke geldings on the trail at a walk for about a month. “The walk’s horizontal movement –that to-and-fro motion –relaxes the back,” he says. After 15 years of research, he found the ThinLine therapeutic saddle pad to be the only product effective enough to control and even halt degeneration of discs. 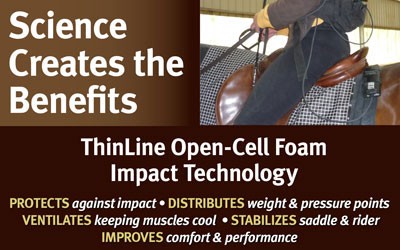 is critical in alleviating back pain when riding. “You don’t want to use a saddle made for a Thoroughbred on a Quarter Horse,” Warson explains. “Generally, if a horse has a sore back, so will you.”

To help make you and your horse comfortable, Warson recommends buying a custom saddle made to fit you and the horse, which can be expensive. If not, a saddle fitter can fit the pad with shims, preferable ThinLine.

are another issue. In the past, bulky synthetic fleece or thick foam pads were popular. People just assumed the thickness would make their horses comfortable and reduce concussion. But that wasn’t the case. Those pads allowed the saddle to shift unnecessarily.

“They’re death to riders,” Warson explains, “Because they have yaw “side-ways motion.”

Warson recommends a pad made of ThinLine, a shock-absorbing nonslip material.

“The pad’s about 3/8-inch thick, and it not only helps riders’ backs, but also the horses’ backs,” he says.

A  Basic ThinLine pad can be used with a single Navajo blanket without adding too much bulk.

Warson was first introduced to the material years ago. “I had a patient who had a tack store in Greeley (Colo.)” he recalls. “One day, he brought me this strange-looking material. It was very thin. He said that ht material was used inside football pads at the U.S. Air Force Academy. Then he asked if I thought there was some use for it in the horse business.”

Warson placed the material on the floor, picked up a gold ball and dropped it. “The golf ball just sat on the material and didn’t bounce at all,” he says.

He immediately saw the advantage of certain saddle pads that calmed concussion without bounce and yaw.

Sheep skin-covered girths and string or rope girths also invited movement and friction. However, today’s high-tech tack and cinches work with a horse’s movement rather than against it, preventing excess movement and keeping a saddle in place.

Exercise can help eliminate back pain. Although you might be apt to concentrate only on back exercises, Warson says other areas also must be strengthened for back support and flexibility. Keep in mind, however, conditioning doesn’t happen overnight, so don’t expect instant results.

“Too many people beat up their backs with hard exercise, without appropriate stretching and flexing. They exercise muscles on stiff ligaments”, Warson observes.

He adds that riders often decide they want to be back in the saddle within a week, so they do too much exercise too soon, and skip critical flexibility work.

“You can’t condition any human muscle or ligament system in that short period of time, unless you’re about 14 years old,” he says. “Unfortunately, as you age you lose flexibility.”

Warson says riders with back problems often fail to strengthen their hips, pelvis and thigh muscles. “Working on these areas is extremely important,” he stresses.

The human lumbar spine doesn’t rotate much, he explains. “The rotation comes form the spin-pelvis meeting point, from  the pelvis itself, and somewhat from the chest-spine juncture.”

To illustrate this fact, Warson says to sit in a chair, rotate your upper body to the left, then look down. You’ll see that your right knee actually moves forward.

“Adults don’t rotate very much through the lumbar spine,” he notes.

Much of the movement comes from the pelvis, which must be strengthened to provide a foundation.

Some people wonder, “to crunch, or not to crunch,” because they hear that strong abdominal muscles support the back. “I found that people who did a lot of crunches came to me earlier than those who didn’t, complaining of more pain,” Warson counters.

Most had gone about these exercises too vigorously and had done too much right off the bat.

Warson is a proponent of Tai Chi, which can greatly help relive back pain. “I think it’s excellent, for two reasons. First it’s done very slowly, so you isometrically strengthen and tone your ligaments, if yo