How to Build Trust With Horses

elaine lockhead-castelao6:37 pmMarch 5th, 2020
How to Build Trust With Horses

“The brain cares about survival before learning.” – John Medina

In the sport of competitive dressage as well as many other equine disciplines it is imperative for both the horse and rider to trust each other so that they can both feel safe and learn. Trust is defined as reliance on another entity or person. As equine enthusiasts we all want our horses to rely on us as their herd leader despite our difference in species. When the horse shows enough interest in our leadership by seeking our guidance at the sight of windblown debris, we know we can also rely on them. This confidence becomes mutual—and only then does the process of competitive riding actually begin. So how does one cultivate this relationship with this different animal? I believe it is similar to how one human learns to trust another human–with only slight deviations. Communication is key. Humans communicate both verbally and non-verbally. Horses can’t speak with words, but for someone who is willing to commit to learning their body language—the ability to see another horse talk can be accomplished. This requires practice, time and the ability to check our emotions at the door.

The biggest issue I’ve observed between people and their horses is the human’s projection of their own emotions onto their pets. It may be safe to do this with a goldfish or a cat, but a horse’s sheer size and power require a greater self-awareness while handling them. This is where an accomplished horse trainer has a better chance of achieving a more solid foundation of trust with a horse than an owner would. A professional doesn’t necessarily have the same emotional expectations with a horse than the owner. Not only do they have the expertise and confidence from years of experience to draw from about the work itself, but they can stay fearless and calm when it is necessary, and they know when to actually be afraid. There is a wide gap between what horse trainer considers dangerous behavior and what an amateur considers dangerous behavior.

For instance, a novice horse handler may get quite frazzled when their horse would flinch at the sight of a log on the ground or they may hesitate to insist their horse step away from their personal space and towards a horse trailer for fear of their horse not liking them anymore if he/she uses any assertion. Whereas someone who has worked with multiple horses on a daily basis for years will understand that a young horse trying to escape the open end of a horse trailer or the inexperienced horse shying on a trail ride a few times are quite normal in their learning process and the trainer’s own body language will reflect that of a mentally grounded confident leader—helping to ground these youngster’s fears. Trainers also understand that horses don’t hold grudges the same ways that humans do and they have faith that a horse won’t hold any ill will towards their more assertive commands.

Some of the red flags a horse trainer looks for in a horse may include how much attention a horse pays to the humans around him versus the stimulation of the surrounding environment. Ignoring humans, yet being intimately in tune with the herd of horses running in the far off distance is a normal behavior for weanlings, but by the time they are leading, learning to tie, and having their feet handled regularly; the interest in their handlers versus their surroundings should be shifting more and more to that of the human. It is shocking to me to see how much trouble some people have just getting their horse to move over enough to provide needed room between the horse and the barn wall or trailer when tied up for them to place the saddle on their back. The novice is way too patient here. This is a perfect opportunity for a conversation about moving away from the pressure of their hand on their side where a leg or spur may be minutes later.

So what do we do to build our horse’s trust in our leadership abilities? We purposely seek out situations that a horse may perceive as threatening. Set them up in a safe way—as training opportunities. Lets say your horse doesn’t like ropes on the ground around his legs. You discover this one day while tacking up and the lead rope falls down to graze against his front leg and he jerks his leg up and runs sideways dropping your pricey custom made saddle on the ground. An amateur’s reaction to this would be to never allow this to happen again, always being cautious with ropes from then on. Avoidance. Instead of avoiding this scenario in the future think of this as a perfect opportunity to train. I could go on and on about desensitizing and break down the entire process for you here and now. But there are numerous instructional tools available online through Youtube and such. We have far more educational material on horse training than we used to, much of it is even free. What was previously thought of as a professional process only has become a household activity. A lot of amateurs are raising their own horses at home instead of keeping horses boarded and in full training. What the DIY horse trainers are lacking is the organizational skills of knowing when to train what and why.

For me, the moment any un-asked for behavior in a horse presents itself I work with it at that moment. This does not mean I ignore or neglect to give my charges formal educational structured training lessons, but I also use opportunities when they arise. When I purchased my horse Stuart and led him into the barn the first time I accidentally let the lead rope drag on the ground and he leaped sideways and started snorting and running backward. Stuart weighs a thousand pounds. I knew I couldn’t make him stop, so I just kept my hand around the rope loosely and went with him until he decided to stop. When he stopped I picked up the rope and began desensitizing him to it. I learned about this exercise from watching Clinton Anderson’s “Gaining Respect and Control on the Ground series 1″. I began by gently flinging the rope over his withers with one hand while I held loosely with the other hand onto the middle of the rope. He ran backward still. I went with him until he chose to stop again. When he did, I stopped. We repeat this exercise over and over and when I can fling the rope ten times in a row in one spot of his body without a flinch, I then up the ante. I fling the rope over the most accepted part of his body first and work my way down until I get to his legs. For he and I (a very smart four-year-old horse and a trainer experienced with desensitizing) this took about 20 minutes. To this day if I’m standing around chatting and holding him at the vets or at a lesson, I default into casual rope tossing.

I’ve had Stuart for over three years now and his fear of the venomous front-fanged rope is history as well as many other little personality quirks I’ve uncovered and worked through along the way. I trust my horse. I feel secure and safe when I spend time around him whether it is bathing him or cutting cows when riding. There is no change in me physically or mentally when a spooky situation presents itself, he relies on this. He trusts me. We are both in the right environment to learn. ~MG

“My name is Megan Georges. I’ve been riding horses since I was five years old. I’ve been riding dressage for the past 15 years. I’ve been a dressage trainer and instructor since 2003. In 2006 and 2007 I had two bad horse accidents which prompted me to seek answers from a different perspective.

Coming from a predominantly English riding background I’ve been shocked to learn that horses with a Western performance background are far more responsive than English horses! For reasons I will discuss in upcoming pages I’ve been spending quite a bit of time cross training in Western riding disciplines. What I’ve learned over the past two years has been so exciting to me that I’ve decided to share as much as I can in a blog.” 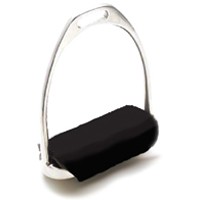 Ride in Comfort with the
ThinLine Ride Right Stirrup Wraps